With 3400+ confirmed Monkeypox cases across 58 counties, the World Health Network declared Monkeypox as a pandemic on June 23, 2022. This announcement was intended to drive concerted global action to stop the spread, control the outbreak with timely effort, prevent grave consequences and improve awareness about symptoms, testing, contact tracing and quarantine.

Otherwise endemic to West and Central Africa, the Monkeypox virus became a global concern over the last few weeks when cases of infection started being reported among patients with no travel history.

To spread awareness about Monkeypox and shed light on its epidemiology and clinical features, we conducted a Practo Connect Webinar on June 26. The webinar was hosted by Dr. (Air Cmde) V.K. Sashindran VSM (retd.), Dean and Professor of Medicine, DY Patil School of Medicine (Navi Mumbai).

“Monkeypox has been around for the longest of times in the deep jungles of Africa, however, it was only discovered for the first time in 1958 when captive monkeys were transported to Copenhagen for some lab experiments. That was when the virus was isolated and identified as an orthomyxovirus related to smallpox”, begins Dr Sashindran. He added that the first case in humans was recorded in 1970 in a 9-month-old baby in the Democratic Republic of Congo.

Monkeypox is caused by a double-stranded DNA virus of the Poxviridae family and the largest animal reservoir is found in squirrels and pouched rats in Central Africa. The contact usually happens during hunting, skinning, trapping, cooking, playing with carcasses or eating animals. “What’s interesting to note is that inter-human reproductive transmission rate is at 0.8% which is why it did not reach an epidemic proportion in Africa,” adds Dr Sashindran.

Even outside Africa, it first emerged as a human pathogen in 2003 when a shipment of rodents from Ghana spread the virus to pet prairie dogs in Illinois and infected more than 70 people. “There has been a slow escalation of cases, especially in the Democratic Republic of Congo mainly through travellers and export of exotic animals both as lab animals and pets. In Congo, during the 70s and 80s, it was a disease that affected small children up to 4 years of age, however, between 2010-2019, the median age has gone up to 21 years and now, at present, it has gone up by another decade. Even within the clades, the Central African clade is more virulent than the West African one with each having a fatality rate of 10.6% and 3.6% respectively,” adds Dr Shashindran.

“Monkeypox is similar to smallpox in terms of timing, occurrence, distribution of the rash, but generally less fatal and severe. It also causes less scarring. The incubation period is 5-21 days. Fever which usually occurs from 10-14 days since exposure is usually accompanied by headache, backache, malaise and prostration-all symptoms commonly seen in dengue or chikungunya, but what is specific in monkeypox is the rash and the interval from fever to rash is shorter in previously (smallpox) vaccinated individuals.” 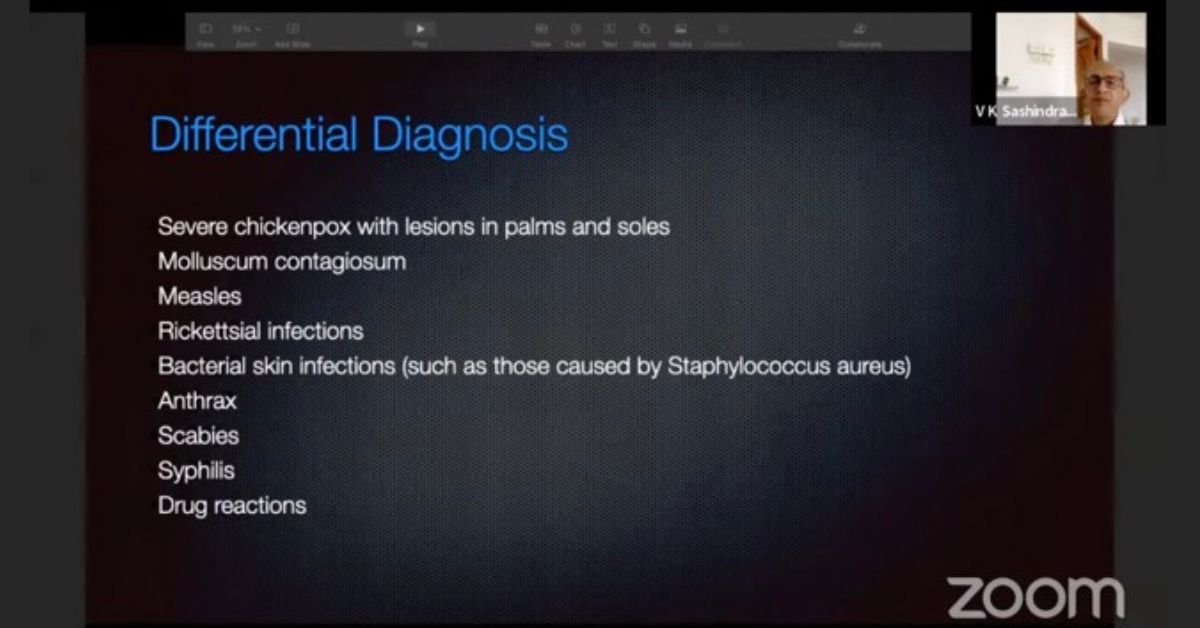 In places where health infrastructure is poor, diagnosis is based on clinical judgement or swabs from vesicles, exudates, crusts and nasopharyngeal secretions, but today we can use EM, culture, PR and sequencing.

“In most cases, treatment is not required. Supportive care and symptomatic relief are good enough just like chicken pox. However, the important thing is to prevent secondary bacterial infection. Some antivirals like Tecovirimat which blocks the intracellular virus from the infected cell are being used in addition to Cidofovir and Brincidofovir. These drugs are available and should be reserved for very sick patients.” explains Dr Shashindran.

The spread can be largely attributed to the waning immunisation against smallpox. The immunisation for smallpox was discontinued in the 80s and we have a whole generation of people who have not been exposed to the virus. Now, it may also be an asymptomatic infection which is circulating in Africa and other parts of the world which is concerning because so far we did not know there could be an asymptomatic infection. “Prevention is the most important strategy against Monkeypox. This includes avoiding contact with rodents and primates, not indulging in inadequately cooked meat, proper handling of animal reservoirs, avoiding close contact with those infected, public awareness, quarantine and contact tracing.”

In conclusion, Dr Shashindran reiterates that Monkeypox does have a pandemic potential because it is now known to spread through respiratory droplets. However, he points out that the spread today is largely happening through people who have close contact with those infected including healthcare workers.

He also added that the reason India has zero confirmed cases could be due to possible cases being misdiagnosed as chickenpox. “If you see severe cases of chickenpox, you should suspect Monkeypox and immediately send the sample for sequencing and advise a minimum of 6 weeks of quarantine.”

You can watch the full video of the session on Monkeypox here. Additionally, you can also check out our YouTube Playlist on Practo Connect Webinars for more such informative sessions on various topics.

Did you find the session informative, please do share your feedback via https://www.research.net/r/MBRH669

Practo is on a mission to make quality healthcare affordable and accessible for over a billion+ Indians. India’s leading integrated healthcare company it connects the entire healthcare ecosystem together – including patients, doctors, surgeons, clinics, hospitals, pharmacies, and diagnostics – to generate exceptional value and service for all, especially the end consumers.

As technology becomes an integral part of healthcare, Practo has also become an essential enabler in helping doctors understand the nuances of managing and securely storing all health data. Practo encrypts all data with 256-bit encryption, uses HIPAA-compliant data centers, and is one of the few healthcare companies to be ISO 27001 certified. Practo is present in 20+ countries, helping over 30 crore patients, by connecting them with 1 lakh+ verified doctor partners.